Home Music Kim Garam kicked out of LE SSERAFIM amid scandal: what will happen...

On July 20, Source Music released a statement saying that the company decided terminate his exclusive contract with Kim Garam. In this way, the now former idol was cut off from the girl group THE SERAPHIM after a series of bullying accusations against him. With the news, Twitter It was divided between the fans who support the artist and those who celebrate that she was left out for the good of the group.

The agency stated, “We would like to inform you of the decision made regarding LE SSERAFIM member KIM GARAM and the plans for LE SSERAFIM’s future activities,” the statement begins. “Our company has decided to terminate the exclusive contract with KIM GARAM”they announced.

He continues, “We extend our sincerest apologies to our fans and those who have shown their love and support for the group by causing them concern over the controversy involving the member.”

Lastly, they reported that henceforth, “LE SSERAFIM will continue its activities as a five-member groupAnd we will spare no effort to support the group in continuing to grow as an artist through their music and performance.” 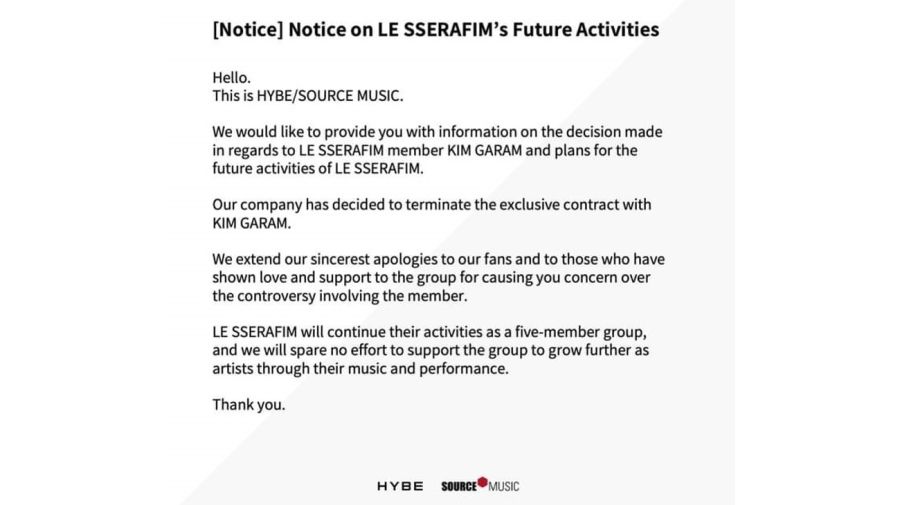 What happened to Kim Garam from Le Sserafim

Kim Garam debuted with LE SSERAFIM on May 2 with “BOLD“. After the harassment rumors came to light, Source Music released a statement denying the accusations and later announced that Kim Garam would be temporarily suspending his activities.

“The posts have been edited with malicious intent. Contrary to rumours, Garam was the victim of slander and cyber bullying, as reported by a third person”, was the argument of the company that decided to take legal action.

An alleged bullying victim of Kim Garam spoke out on May 19 through the Daeryun Law Firm. The young woman who was identified with the pseudonym yoo eunseo appeared in the school document that was leaked on May 15. The legal representatives warned HYBE that they would reveal the full content of the school report that sanctioned Garam in 2018, if they did not apologize to the victim.

In numerous online and SNS communities, “the exaggerated rumors that Kim Garam was a one-sided stalker who routinely harassed her classmates, so we would like to clarify these accusations,” Kim’s agency said as soon as the accusations were released.

Later, they assured that “Kim Garam never hit any of his teammates with a flowerpot or a brick. nor was she involved in any gang fights.” “When the bullying got out of hand, Kim Garam and his friends turned to their teachers for help”they affirmed.

The rain of complaints began when the alleged victim left a comment on Kim Garam’s fan cam video on YouTube. “I didn’t say anything because I was afraid I’d be sued. It’s not like I didn’t post because I had nothing to say. At least every kid at Kyungin High School knows how cleverly dirty you are. When I think about how happy you are after debuting as an idol, the one who feared me and the one who made me not want to go to school, I seethe with anger and my whole body trembles. Make sure to climb. to the top and be loved by people. There were a lot of people to take you down then,” said the teenage complainant.

Who make up Le Sserafim

Le Sserafim is the first female band of the Hybe agency, the corporation that created and still represents the global South Korean music phenomenon BTS. His first work is entitled “Bold” and has managed to sell 307,450 copies in the first week. This composed of Kim Chae-won, Huh Yun-jin and Hong Eun-chae and the Japanese Sakura Miyawaki and Kazuha Nakamura.

Under its previous name (Big Hit Entertainment) Hybe came to represent the now defunct “girl band” dudealthough the group was originally formed in 2015 by Source Music before the label was acquired in 2019 by the giant behind BTS.

The sales data for this first week in the local market is the best ever achieved by a South Korean group of women and, with those numbers alone, “Fearless” is already the ninth best-selling work by a female band in South Korea.

Only six K-Pop girl groups have managed to place more than 300,000 copies in the first week of a record release’s life. Among these six bands are ensembles of the stature of BLACKPINK or Red Velvet, and also Iz*One, a group to which the now leader of Le Sserafim, Kim Chae-won, and the Japanese Sakura Miyawaki also belonged.

the name of the band, Le Sserafim, is an anagram of the English speech “I’m Fearless” (I’m not afraid), hence the name of this first EP, which compiles 5 songs, including the one that gives the album its title, “Bold“, which in the first week already has more than 48 million views on YouTube.